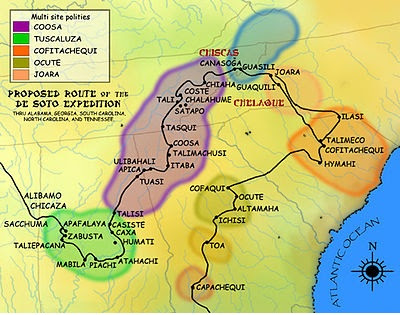 Ocute, later known as Altamaha or La Tama and sometimes known conventionally as the Oconee province, was a Native American paramount chiefdom in the Piedmont region of the U.S. state of Georgia in the 16th and 17th centuries. Centered in the Oconee River valley, the main chiefdom of Ocute held sway over the nearby chiefdoms of Altamaha, Cofaqui, and possibly others.

The Oconee valley area was populated for thousands of years, and the core chiefdoms of Ocute emerged following the rise of the Mississippian culture around 1100. Ocute was invaded by the expedition of the Spanish conquistador Hernando de Soto in 1539. At that time, Ocute was locked in a longstanding war with the rival paramount chiefdom of Cofitachequi in present-day South Carolina.

The chiefdom remained a significant regional power into the 17th century, although Altamaha eclipsed Ocute as the primary center, leading the Spanish to refer to the paramountcy as La Tama. In the 1660s the chiefdom fragmented due to slave raids by the English-allied Westo people, though several of its towns relocated to Spanish Florida and formed part of the Yamasee confederacy.