TRUTH IS STRANGER THAN FICTION: THE ORDER OF THE BLACK PANTHER IN ANCIENT AMERICA 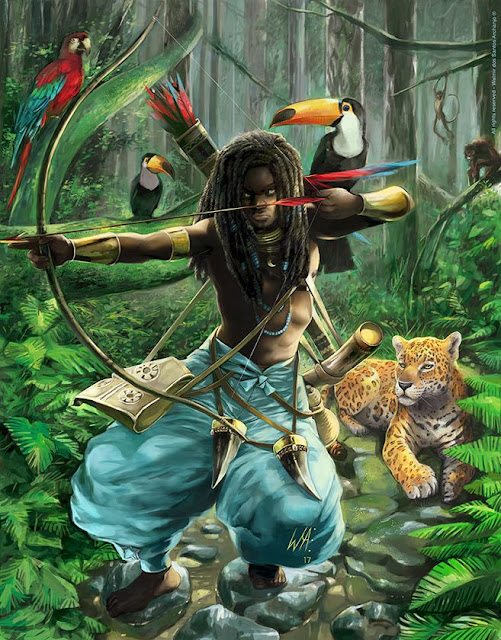 In the comic, Black Panther is a noble title given to the chief of the Panther tribe in the advanced African city of Wakanda. While the Panther is a hereditary title, it still must be earned. The Panther habit is worn in diplomatic missions as the symbol of nobility and head of state. Although this epic comic is not based on a historical nation in Africa, could there be any correlation to an advanced nation that used the Black Panther as a symbol of head of state? Did you know that there was an ancient, advanced nation whose symbol of nobility was the Jaguar/Black Panther? However, you won’t find it in the continent of Africa. To find these ancient Jaguar Kings and the Shaman Order of the Black Panther you would have to turn to the West in the Ancient Olmec civilization of Mexico.

In the 1920s, archeologists stumbled upon colossal heads carved from volcanic stone. The facial features were precisely carved, presenting Africoid features: broad nose, full lips, and course hair. Many of these portraits show the Olmec kings wearing helmets with jaguar paws. The founding of the first civilizations of the Americas were attributed to these Black Jaguar Kings famously known as the Olmec. Like the Black Panther kings built the wonderful nation of Wakanda, these Shaman Jaguar Kings laid the foundation of great ancient cities around 4,000 years ago. They built prosperous metropolitan cities like La Venta, San Lorenzo, Tres Zapotes, Monte Albon, Chitzen Itza, Teotihuacan, and El Tajin in Mexico.

The priesthood of the Olmec left much iconography of Black Jaguar transformation, termed by anthropologists as Were-Jaguars. These statuettes were shaped from black jade or obsidian stone with both jaguar and human features. The great shamanistic order of the Olmec left behind jaguar-faced figurines resembling human beings like the popular Marvel character Black Panther.

In the East, the lion is known as the king of the jungle while in the West the jaguar is king. Thus, many murals on the temple walls depict the Mesoamerican kings dressed in jaguar skins and headdress. The jaguar is the third largest cat of the Felidae family of cats and can thrive in various terrains ranging from desert to scrub terrain while its normal habitat is in dense forest and swamps. The jaguar is an agile beast, a strong swimmer who can leap in the water to snag prey and climb many feet along the branches of trees with their prey. The most distinct attribute that was revered by shamans and warriors alike is the jaguar’s deadly capacity to hunt in the hours of darkness. Mostly a nocturnal predator, the jaguar’s silent presence in the forest corresponds to the mystic realm and this attribute accompanied the shaman on his demanding otherworldly voyages. Consequently, observations of these attributes attained by this marvelous creature were equated in shamanistic spiritual warfare as they took the form of the jaguar to the inner world, like the sun took the shape of the jaguar to the underworld in Mesoamerican iconography.

In the comic Black Panther, the Heart-Shaped Herb was said to have been a gift from the Panther God, the local deity worshipped in Wakanda. In the process of becoming the Black Panther, the warrior must complete several tasks and then have the juices of the Heart-Shaped Herb applied to their body. The legend was that anyone not of noble blood would not survive the process. Likewise, in the Order of the Jaguar in Olmec civilization the chieftain came through hereditary. Some tasks of the future Olmec ruler were to go on battle campaigns and consume the herb. In the jungles of South America, the jaguar eats the yage vine a hallucinatory, an herbal plant that appears to heighten the jaguar’s senses and produce enjoyable effects. Yage (Banisteriopsis caapi) is found in the jungles of the Amazon and is an important ingredient brewed in the sacred drink Ayahuasca used by South American shamans. This ingredient was discovered by the jaguar shamans in their transformations and observations of jaguars. This correlates with Black Panther gaining the powers of speed, agility, strength, endurance, and healing by consuming the Heart-Shaped Herb.

The jaguar’s ability to move about in both land and water is spiritually symbolic of the valuable trait in one obtaining balance through turbulent, aquatic like emotional experiences and situations of life on stable ground. The jaguar’s ability to maintain balance in trees on the chase for prey was a trait admired by shamans of all lands. For instance, the priests of Nubia embraced the same attributes of the jaguar’s relative; the leopard. In fact, the Nubian leopard priests were part of the trading network of ancient aboriginals who traveled to Ancient American, Olmec complexes with Nubian metal workers and soldiers to share information with their relatives in the West.

Like the Olmec jaguar-men, young were-jaguar figurines were carved from black stone, symbolic of the cosmic darkness of creation and fertility of black soil. The dark-skinned Olmec kings and were-jaguar princes obtained divine rulership through the connection to the agricultural god representing fertility and their ability to sustain the culture. One example of a jaguar-man carved from black stone holds a jaguar cub over his shoulder showing the veneration of the jaguar in the Olmec culture, so much that toddlers were portrayed as jaguars.

In the widespread jaguar iconography throughout Mesoamerica we see the dispersal of spiritual Olmec knowledge during their travels. It seems they would abandon or deliberately destroy their cities possibly prompted by spiritual inclinations of shamans and prophecy of invasions. Later, the esoteric aspect of the jaguar was deified in contemporary Mesoamerican societies as the Olmec societies started to leave and explore new lands. In North America, there were Olmec satellite pyramid-mound complexes in Alabama, Georgia, Louisiana and all the way up the Mississippi River. A site termed Moundville in Tuscaloosa, Alabama also had jaguar artifacts showing aspects of the Jaguar Order in North America. Furthermore, Tuscaloosa means Black Warrior.

Kneeling feline figurine 1400-1500 A.C.E in Florida
Are all the correlations between the Ancient Olmec civilization and the Black Panther Comic just mere coincidence? We see striking similarities in the Black Jaguar nobility, the consumption of an herb for heightened senses, and advanced metropolis in both the Olmec Civilization of Ancient Mexico and Black Panther. Could this be another strange case of the Mandela effect? I wonder if Stan Lee of Marvel Comics had knowledge of the Olmec civilization and its Black Jaguar/Panther deity when he wrote Black Panther. Sometimes art imitates alternate realities and maybe our ancestors executed the synchronicity of Olmec Majesty for us to witness it, in all it’s glory on the big screen. Who knows. Nevertheless, it turned out to be an awesome comic and I can’t wait to see the film. Long live Black Panther and the Olmec Kings!

His signature secured the "Yamassee Native American Treaty of 2004" between the United States of America and the Yamassee Nation ..