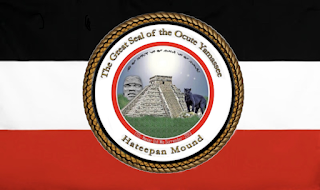 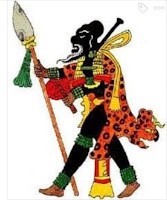 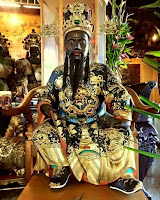 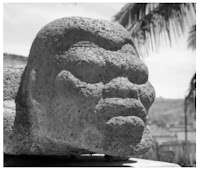 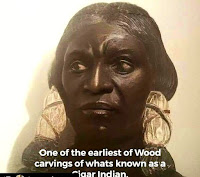 gman:
Leslie, I don't know where you got this information from but some of it is very inaccurate.
I only have a few minutes on the computer so I'll just go over a few points.
What I DO know for a fact is that the Olmecs were either Black Africans, or Black Africans lived among them or at least visited them, long before Columbus. The Olmec stone heads cannot be interpreted as depicted anyone other than Black Africans.
After that whoever compiled this information veers off into wild fantasy. SOME of it may be true, for instance I know nothing about the Chinese connection, it could be true, I would have to research it more. But here are just a few things that are totally false:
The inhabitants of Haiti are not descended from Olmecs, 'Arawaks', or any other group of Native Americans, Black or otherwise (other than maybe a small amount of Native American blood in some people). The Europeans entirely wiped out the Native population of Haiti, as they did on most of the Caribbean islands. Haitians are descendants of Africans, mostly West Africans of the Yoruba, Fon and Dahomey nations, all of whom were brought to Haiti as slaves by the Spanish and later the French. Since the colonial powers kept track of the importation, buying and selling of slaves as they did any other form of 'merchandise', those records must exist somewhere to be checked if you have any doubts. Vodoun is not exclusively Yoruba in origin, Yoruba beliefs predominate but it also has elements of Fon and Dahomean beliefs. The word 'vodu' is Fon (I believe) for 'spirit-god/goddess-elemental energy', depending on how you translate it.
The Taino are not separate from the 'Arawak', they were simply a sub-group of the 'Arawak' who lived in Cuba and Jamaica. They have nothing to do with the Olmecs and they are not Black. Nor is 'Arawak' their proper name, Columbus (being the idiot that he was) called them that because he thought he was in the Indonesian islands where the SARAWAK people live. In Guyana where I am from, the 'Arawak' call themselves Lokono and they have lived there for probably 10,000 years or so. There are 8 other Amerindian (Native American) 'tribes' in Guyana, none of whom are Black (apart from individuals who have a Black parent). They have also lived there for many thousands of years. Up to this day, some of them live deep in the forest and have little contact with the outside world. It is extremely implausible, to say the least, to say that their copper-toned skin color is the result of interbreeding with Portuguese or any other Europeans.
As for the description of the Caribs as 'sadistic cannibals', I take personal offense to this as I have Carib in my family. (My mother's half-brothers and -sisters are half-Carib, half-Black. The Dominican reggae artist Nasio Fontaine is also half-Carib, take a look at a picture of him and you'll get a pretty good idea of typical Carib features). True, the Caribs were warriors and true, they did wage war on the more peaceful Lokono/Taino to take over their land. But there is no evidence that they were particularly 'sadistic'. Their culture encouraged waging war on other groups and conquering them, but I've seen no evidence that it encouraged taking pleasure in slowly torturing them or anything like that (as opposed to the European colonizers who had a thousand and one sick ways of torturing people to death). As for the cannibalism, yes, there is evidence that the Carib engaged in ritual cannibalism, as have many other cultures on every continent. This doesn't mean they went around hunting people in order to eat them, it means they would ritually eat small amounts of flesh from either respected warriors or elders of their own people when they died, or from captured enemy warriors who they considered courageous. By doing so, they thought they would absorb the positive qualities of the person whose flesh they ate. This may sound disgusting to us, but as I said it's been a part of many cultures throughout history and across the world. I dare say a future vegetarian society would look back on present-day meat consumption as just as disgusting- or even more so, since it involves torturing and killing massive amounts of animals for profit, rather than taking a small bit of flesh from a few people in the belief that it would be spiritually beneficial.
All people in every corner of the earth can trace their origin to Ithiopia-Africa, this does not mean that people haven't developed their own distinct cultures over the many hundreds of thousands of years since then. It's a disservice to Native Americans, who are just as downpressed as we are (or more so, at least in my country) to say that they have no distinct identity, that really they're all Black, or that EVERY aspect of their culture came from Black people. It would be one thing if it was true, but it just isn't. In 2018 We Yamassee are now regathered ourselves and now reside in the Ocute Yamassee territory in Georgia under leadership of Chief Tamuhawk. A nation of peace has risen for future Yamassee.